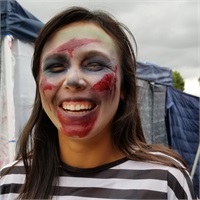 Alexia was recruited by Taylor and joined Salem Haunts in 2015. Her initial year accidentally brought in her father, Rich, who also debuted in 2015. In 2016; due to Halloween on a weekday, Alexia could not refill her roll as an actress due to her education (too much homework). However she made her return in 2017 and Salem Haunts is looking forward to many years afterwards with Alexia.