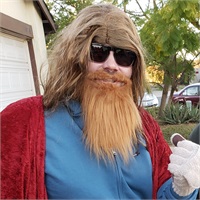 Chris joined Salem Haunts as a Set Constructor for Rich's room in 2018. After witnessing all the fun everyone has while building the set, he wanted to join in. He debuted as CEO's 2nd favorite slasher, Freddy Kruger completing the CEO's fave dream team of Jason, Freddy and Michael. In 2019, instead of a room, Chris opted out to be "crown entertainment" dressed as "Drunk Thor." SH has never really had a crown entertainer and Chris's debut was successful. SH is fortunate to have a Set Constructor as well as entertainer as part of the family.