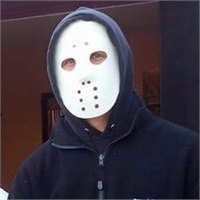 Standing at almost 7 feet tall Duzer make a big presence when he appears as Jason in Salem Haunts. He has a way of saying nothing but scaring the poop out of you. He will follow you out of Salem Haunts to make sure you scream your last scream.

Duzer left to Texas to obtain his college degree. Salem Haunts has missed him, however education is important.

He made his return debut in 2018, returning as Jason. Surprising fans who remembers his in the early years of Salem Haunts.

He is in his Senior Year in college, so how knows....he may be returning in 2019 and stay for good!