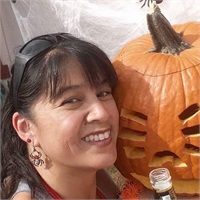 Ethel is the person responsible for dreaming up Salem Haunts back in 2012! It all started with 1 tent and 1 actor (Michigan D) - now there's 8+ rooms and more than a dozen live actors! Not to mention a whole storage filled with Halloween stuff!

Ethel is involved with all aspects of the haunt, from purchasing new material, recruiting actors, planning meetings, planning layouts, set-up, take-down, and even handing out candy!

Ethel enjoys giving back to the community - she grew up in Mira Mesa and is a Mira Mesa High School Alumni!

Did you attend MMHS? Alumni of MMHS, class of 19XX, Mr.V was my Principal.

What is your favorite Horror Movie? Too many too count, fan of the classic Exorcist and original Poltergeist. Slasher films, such as original Friday the 13th and Halloween.

What is the most influential horror movie that motivates you to be involved with Salem Haunts? The original Friday the 13th, Jason and Nightmare on Elm Street, Freddy are the reasons why Salem Haunts was created. I used these two props to create the first tent on year ONE of Salem Haunts.

What do you like most about being involved with Salem Haunts? I enjoy watching the crowd get scared of a simple “homemade” haunted house. I love hearing people say how it’s just a small free haunted house, how can it be THAT scary. Then see them watch out and become impressed of the whole event.