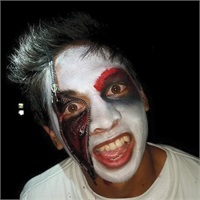 DMNTD was the first and original actor for Salem Haunts, and has been scaring people ever since. You will often see DMNTD warming Salem Haunts fans up while they are in line. He is involved with the planning, set up, and take down every year. Michigan is also involved in Recruiting and Social Media promotion of Salem Haunts.

What's your Favorite Halloween Haunt? - Knotts Scary Farm and my favorite maze is the House of Horrors.

What motivated you to be involved with Salem Haunts? - Knotts Scary Farm inspires me to be a better and scarier monster.

What's the scariest Halloween incident that happened to you? - When I forgot where I left my Salem Haunts costume!

What do you like most about being with Salem Haunts? - Seeing it grow to where it is now,

What's the coolest costume you ever wore on Halloween? - Coming soon in the 2017 haunt!