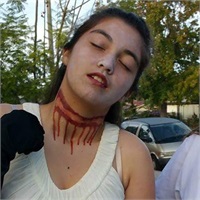 Taylor starting haunting in 2013 despite being young enough to still go trick or treatin.'

In 2012 she was entertained watching her brother and original actor, DMNTD scare everyone. In 2013 she decided she will participate in Salem Haunts and use her break time to go trick or treatin' in the neighborhood.

Every year she becomes more and more involved with canopy lay out, group discussions, canopy set up and take down. She has brought in some recruits that combined altogether have become a big asset to Salem Haunts.