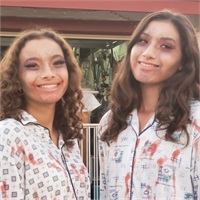 Twins Amber and Trinity joined Salem Haunts in 2018. Nieces of CEO, they finally gave up trick or treatin' and decided to help out Salem Haunts. As ballet dancers, their debut haunt required them to become contortionists to hopefully give The Grudge effect. They are very imaginative as they as they simply "wing it" during the haunt. Salem Haunts is very happy to have these two ladies be a part of the team.